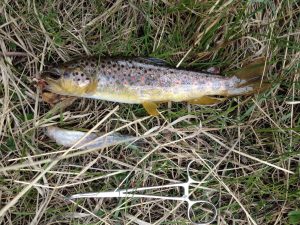 For me anyway, a big part of loving a thing is wanting to be it. I want to know how it feels to be Michael Jordan or a steelhead, contorting my body into cool shapes while suspended in air. I want to inspire like a trout does, to take breath as it has taken mine. I covet the apparent austerity of a trout’s life, the command this animal has over its urges and appetites. The water temperature says this, the trout does that. Nymphs in the flow, a grasshopper kicking overhead, time to eat. No added sugar, alcohol, anxiety over sitting still, depression-fueled binges, or nicotine out of boredom. When tending to its needs, a trout expresses perfect discipline, stopping precisely at enough. Such beautiful simplicity!

Or as I like to call it, BS. I’m thinking of the Rio Tusas after a two-day rain, nine-inch cutthroats with bellies the size of lemons. Forced to cull a rainbow, I filled the palm of my hand with earthworms from its stomach, which had torn open at the mere touch of my knife blade. Alaskan dollies barfing pink embryos while still on the hook; obese rainbows inciting sockeyes to stir their own nests and spill eggs. New Mexico Game and Fish dissecting a 30-inch brown trout on the Rio Chama, finding not one, but two, baby beavers in its gut.

I know of a 7 inch brown that ate its four inch cousin not long before having a go at my two-inch Chernobyl Ant, which, when considered with the previously mentioned anecdotes, suggests the possibility that the trout’s appetite control is less a talent to be envied than a myth to be rejected. So maybe I love trout because I am already like them, maybe even born that way!

In the context of gluttony, a solid case could be made. For every fish that tried to cram my salmonfly imitation into a mouth overflowing with naturals, I can recall a stumble through camp after a bourbon too many. Or a quickly waning day when the next fish will be the last, or the next one after that, or “We’d better reel up if we want to get to Murder Burger before they close.” Buddies in the car ranting to favorite tunes. The early first grab telling you what kind of fishing the day will bring. The smell of rain on willows. A lunch of salami, unpronounceable cheese on fresh olive bread baked with unfathomable love. Hot day swims and bankside naps. Dying coals and a Drum rolled at midnight, silhouettes of fir trees against star-filled canyon skies. Every minute full.

Buzzer-to-buzzer indulgence is, for me anyway, the point of fishing, and a fact that merits celebration. Or maybe not. It’s one thing to celebrate, another to do it publicly as, in this age of social media, is our apparent addiction. It seems we’d rather watch ourselves being than to simply be, a step short of indulgence if you ask me.

And a step short of a trout, my object of greatest envy. holding in the current, accepting everything it brings, be it sparse or bountiful.

Appeared in Trout Unlimited Voices from the River Blog June 2018

Land of the Free