According to a friend of mine, wolves have been nothing but a problem since they were reintroduced into the wild in the lower 48 states. They kill lots of big game animals and house pets, and lots of people living in wolf country are really scared of them. My friend says that wolves are cowards, even while being so bloodthirsty.

I have heard the sermon on wolves many times. Just the other day, someone emailed me several photos of some enormous wolves that were killed in a regulated wolf hunt in Idaho. It made me feel good to see these predators being managed in much the same way that human hunters are required to be, only makes sense for the wildlife resource.

But then, as I feared would happen, the shooter attached this rant:

Just a few of the wolves killed this year with the Idaho wolf tag. Wish I could show you a few hundred more pictures. It is just amazing how big they are. Deer, elk, and livestock killing machines. The big question you have to ask yourself is why? These massive wolves are not the native wolf that lived in our area 100 years ago. There was a reason these things were exterminated nationwide despite appearing cuddly and cute. I wonder if our city dwelling tree hugger society that never has left a city really understands the impact of these killing machines. I wonder if a T-Rex was available would they want to put them back in the wild.

It’s just a matter of time before one of our granola-loving-green-peace-hikers goes out on a hike and runs into a pack of these killers and becomes part of the food chain. If you are going into the Blues, Cascades, or north of Spokane hiking, game scouting, mushroom hunting or something else you better start carrying a side arm. Can you even imagine being out by yourself and having 8 to 12 of these monsters surround you! Think about what kind of appetite a dozen of these must have, and remember they are the only predator in our nation that kills for fun along with for food. The amount of animals they take are just a partial portion of what they need to eat. When elk are calving they will kill the calves just for fun after they have had all they can eat and leaving the rest to rot. 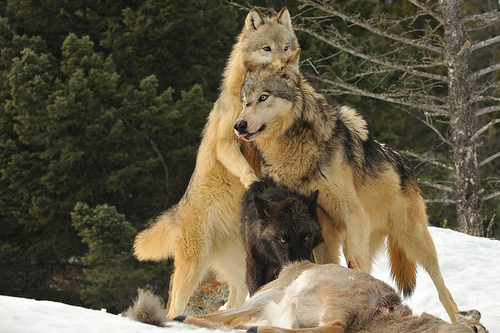 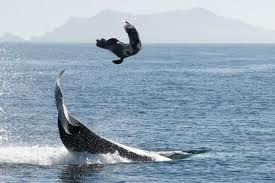 This is not to take the wolf issue lightly. Wolves are large animals forming large groups that require lots of meat to survive. That the wolf is also extremely intelligent and can break an elk’s leg with its mouth makes it formidable wherever it is found. To survive, wolves require immense ranges in good wild condition, country that is in short supply even in North America. Direct or indirect impact on humans is therefore inevitable, which is why something should be done.

That’s the easy part. We must manage wolves by hunting them, keeping their numbers in check to fit the modern world we hope they will always live in. Sorry, tofu-eating, Prius-driving, yoga-practicing, hemp-wearing, drum circle-interpretivedancing, ivory tower college-attending, woodflute-playing, clean air and water-liking, microbrew-drinking, Yani-listening, Bill Moyers-watching, vegan-annoyinglybeing, bra-notwearing, patchouli-reeking city slicker socialists, but that’s the way it’s got to be. Wolves will thank you for agreeing with me.

The not so easy part, ABBA, is how to deal with this fear of wolves you mentioned, because it’s real. Read the above note again and see how freaked some people get. Many are descended from pioneers who worked the mines and milled the logs and laid the railbeds of America as we know it. They’re the ones who settled the west (we all did, of course, but humor them won’t you?), so they’re definitely unaccustomed to a natural world they can’t control. Yeah, they’re afraid, and one should respect that and empathize. 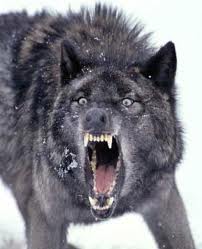 I guess I see where they’re coming from.

But only to a point. It’s one thing to expect protection for one’s property and understanding of one’s fear, another to advocate the extirpation of an endangered species on imagined moral grounds.  A group called Smoke a Pack a Day is one of the main promoters of the myth that wolves kill for fun and butcher whatever they come upon with a lust for inflicting the greatest pain and suffering. In the minds of many, wolves aren’t just deadly, they’re evil.

Even if we pretend that damning the morality of an entire species isn’t ridiculous (or that modern human history isn’t absolutely slathered with us actually choosing evil over good), we still end up on the “lest ye be judged” side of the equation. Do human hunters benefit elk by culling the sick and the weak? Not really. They cull a herd’s golden genetic nest egg and celebrate this dire impact by hanging heads above fireplaces. Would a cow take death by wolfpack or by feedlot? It’s impossible to know of course, but certainly not to speculate that either alternative would suck pretty hard. I could go on all night, wolf haters, but it really comes down to this: if you are one of the 7 billion apex organisms thoroughly dominating this planet, moral absolutism is a fantasy you aren’t allowed to have anymore.

Always good to remember that the beauty of nature is in part a product of its cruelty. Life has predators in it, grizzly bears, tigers, rattlesnakes, black widows, white sharks, crocodiles, bankers, politicians, lawyers, metrosexual Hollywood vampires, dealers of legal and illegal drugs, car salesmen, and that a-hole I worked for in New Zealand who left the country without paying me. No matter where you live or what you do, you can’t escape the truth that there will always be something out there that sees you as supper. While exterminating wolves won’t change that, keeping one step ahead will help you live with it. 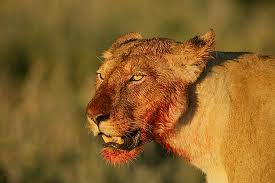 “You can’t go wrong with this subprime mortgage! Trust me.”